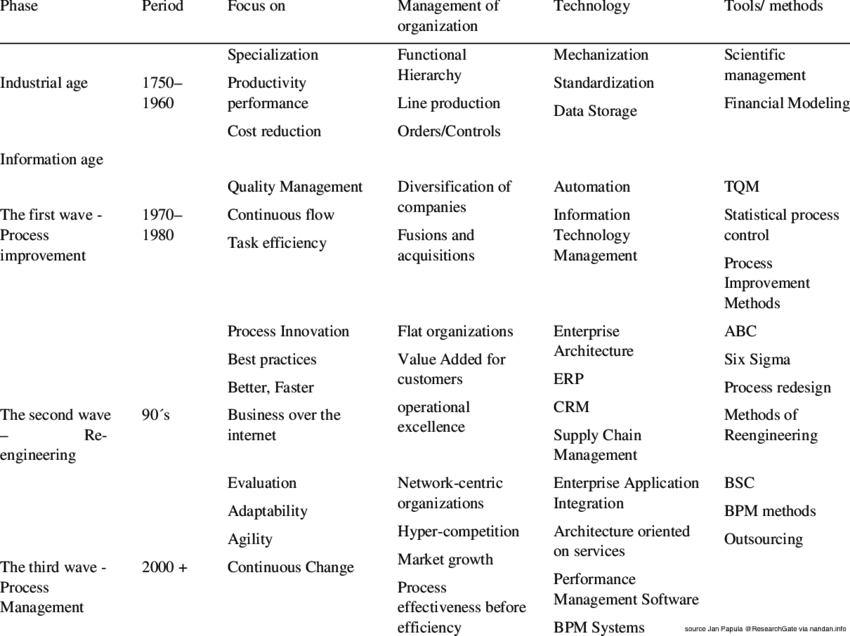 When we started a few years back, Robotic Process Automation (RPA) was an emerging technology. We had to explain to people what RPA was. It’s still emerging today however, I can see that lot more people know about RPA (and the hype). RPA is certainly driving computer-based automation in multiple industries, companies of all sizes and across every geography.

RPA as I see, is a continuation of Computer-based automation that has evolved over the ages.

We have gone through multiple waves of process automation since the advent of the Information age.

In this early phase of the Information revolution, we saw computerization of lines of businesses in many organizations. This was lead by Management Information Systems or MIS groups within each organization. This phase of process improvement included Quality management (TQM) and continuous process improvement methods. As organizations embraced process-centric approaches to improve business results, they looked to re-engineer and manage the Business processes better.

Business Process Management (BPM) uses multiple methods to optimize end to end business processes. As the Tech companies of the nineties (including IBM, Oracle) came on board this bandwagon, they brought in multiple automation technologies. This technology enabled the automation of business processes and was called Business Process Automation (BPA). BPM continues to be a driving force today and RPA is considered an emerging field within BPA.

RPA emerged in the 2000s – Blue prism released their first product in 2003, UiPath and Automation anywhere released their automation libraries around the same time (all companies were founded a bit earlier).

As per Alastair Bathgate, CEO of Blue prism: “We started focusing on the BPO space as a route to market.. .”. UiPath also started seeing traction for their product with an Indian BPO company. So RPA started off as a way to reduce costs in Business Process Outsourcing and moved to Shared Services, IT Outsourcing, and other Business areas.

Outsourcing reduces expenses by moving lower-level manual tasks and processes to cheaper labor. They were looking at different levers to continue to deliver annual cost savings to their customers. In an effort to continue to reduce costs, RPA started out improving the repetitive processes carried out by these Outsourcing providers.

Robotic Process Automation (RPA) has resulted from the use of multiple technologies to solve business problems. It started by using the humble legacy technologies like screen scraping combined with the Automation workflow software. With the advent of Artifical Intelligence (AI), the cognitive aspects also have started showing up in RPA tools.

Different RPA providers have taken different paths technologically and have evolved into AI unicorns that we see today. All companies have worked with early customers to improve their Digital workforce or bot offerings.

Blue Prism started off to create an “outsourced workforce” for BPOs.

Blue Prism was focussed on creating a Digital workforce from the beginning – they were thinking towards solving the problem of doing things an outsourced robot would do including doing the work and scheduling them.

Blue Prism is therefore built around that. They have a Microsoft Visio like interface to configure the tasks to be performed by the Bot. These Bots can then be deployed and scheduled using an admin console.

Blue Prism is morphing into a technology platform. They have been calling it “Connected RPA”. The aim of the platform is to provide access and foundation for intelligent automation – across multiple industries, companies of all sizes and across every geography.

It appears that UiPath then set out Productizing these libraries. Initially, their product was not finding much traction. An Indian BPO company that was doing a pilot project to find the best provider of RPA technology discovered them. Through this opportunity, they discovered the BPO world and the repetitive work that can be solved through their product – a product-market fit was finally realized.

Around 2012, UiPath (DeskOver) launched the first UiPath Desktop Automation product line that specifically targeted the RPA market. They had just realized the market fit with RPA and started putting its resources into building a platform for training and orchestrating software robots.

Their Platform – the UiPath Enterprise RPA Platform – thus has UiPath Robots which are designed in a UiPath Studio and can are centrally managed from UiPath Orchestrator.

Tech Tip: Uipath is based on Microsoft Workflow Foundation which is again a Microsoft .NET technology meant to create applications that execute an ordered business process. This is a bit of concern as this is probably not on Microsoft’s Azure roadmap.

Automation Anywhere started off as Tethys Solutions and was founded in 2003. The name “Tethys” comes from the Greek goddess of water. Their vision was to make business process automation be as ubiquitous as water. Quite a great vision and they seem to be succeeding to a good extent on that.

Mihir and team were aiming to replace the scripting applications that were manually done within organizations. Their product, Automation Anywhere allowed for the creation of business process automation designed by the user. They focussed on supporting all aspect of end-to-end business processes.

As per Mihir, they created the product (Automation Anywhere), launched it and went out for a coffee break. When they came back they were surprised to find that someone from Australia had already bought it!

Automation Anywhere still looks quite like the product they released around 2009! The vision is remarkable. They documented the process and also had a built-in ROI calculator!

Automation Anywhere has also started calling it a platform – “Automation Anywhere Enterprise – The RPA platform for the future of business process automation”.  Their core product works like other RPA with a studio to configure workflows and a “Control Center” to deploy and manage the bots. They also have a product called IQ Bot – which is RPA plus AI.

Tech Tip: Automation Anywhere is also built on Windows .NET framework. You can see that all the top RPA tools are built on Microsoft technologies. This works well because many Enterprises use Windows desktops to do their day to day work. RPA works through these Windows interfaces.

RPA is in what Everest is calling a virtuous circle – Real value is leading to more capital which is invested in the tools giving more and more value. 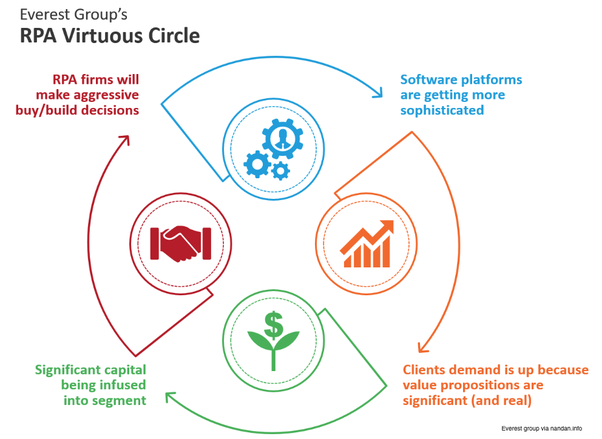 With significant capital being infused, we can see that RPA tools will get better and add more features quickly. Here are a few trends that I see:

As I said in the beginning, awareness of RPA has increased multi-fold. More and more enterprises are adopting and implementing RPA. There are challenges to scale through which we shall discuss later.

RPA is evolving to include AI. What we can expect to see in near future from RPA tools include Unstructured data processing, Predictive & Prescriptive Analytics, and simple judgment based automation.

One of the challenges of implementing RPA is that you need to discover, shortlist and prioritize the processes that are ripe for automation. Vendors have been adding this feature and more could follow suit.

It does look like bots would be delivered as cloud services as a natural progression. Most of the RPA tools can work from the cloud even now but is not widely used. There is a possibility that some of the tool vendors would be acquired by Amazon AWS or Microsoft Azure in the future, and be delivered as their service along with their advanced AI capabilities. 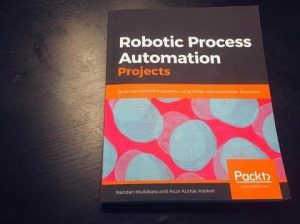